Irene's choice of music this week

This week i feature some Deep House

Oliver Schories - My Summer (even if it's not summer yet)

The idea of Safe & The City

As I have travelled the world, I was mostly in places I’ve never been before and I always wanted to be safe - like probably every human being wants to be. I visited places, which other people told me not to go, because they were thinking, it’s dangerous even if they have never been there themselves. I didn’t let fear or anxiety take over my adventures spirit. When I first started to travel alone (with 22 years), I didn’t have a smartphone yet, navigation apps - like we are used to have them now - didn’t even exist. But nonetheless, for me it was never a problem to explore new places, new cities.

Many people worry about their beloved ones, when they travel to unknown places. But luckily we still go out there and explore those places.

It’s about time, that we use finally the technologies to empower with information to keep you safe. Knowledge of safe streets and risky areas. And my friend Jill is behind this great idea, putting this informations out there and making them available to everyone - using a navigation and safety app, that guides safely in unknown cities.

How many mothers would sleep better, knowing that their daughters would use an app like this?

As i would like to share with you this amazing great idea, that finally got launched in Central London last Thursday, I think it’s the best to just interview the founder and CEO of Safe & The City Jillian Kowalchuk. You know her already from my first blog „Have you met Jill?“ where I accompanied her on one of her working days. 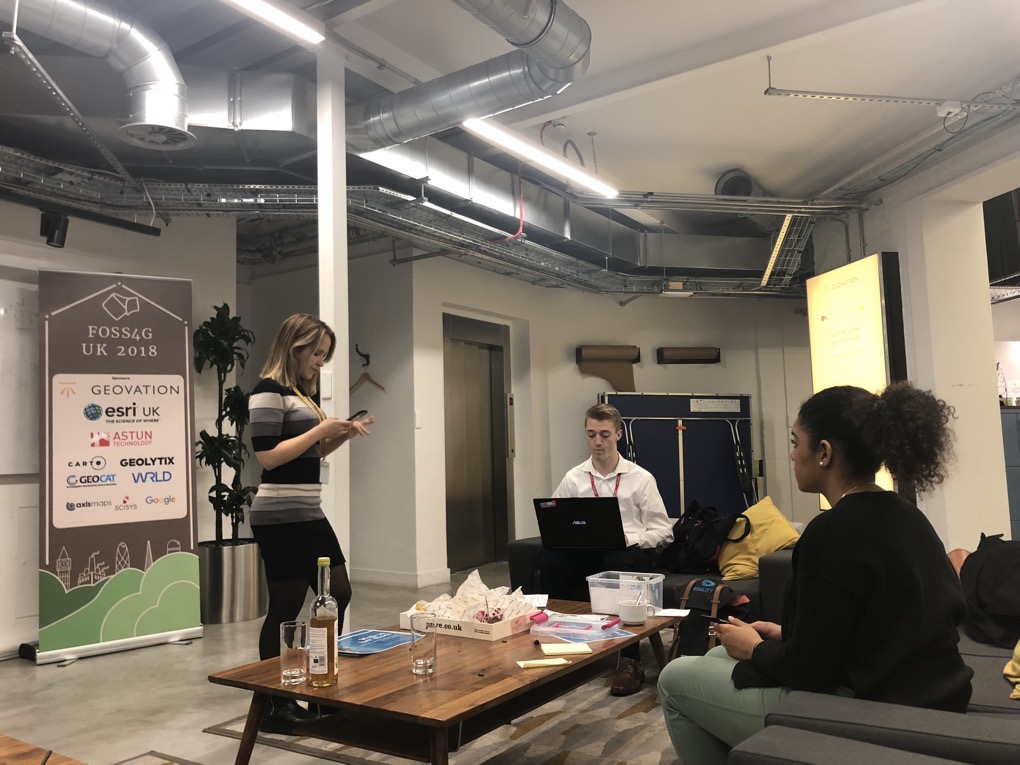 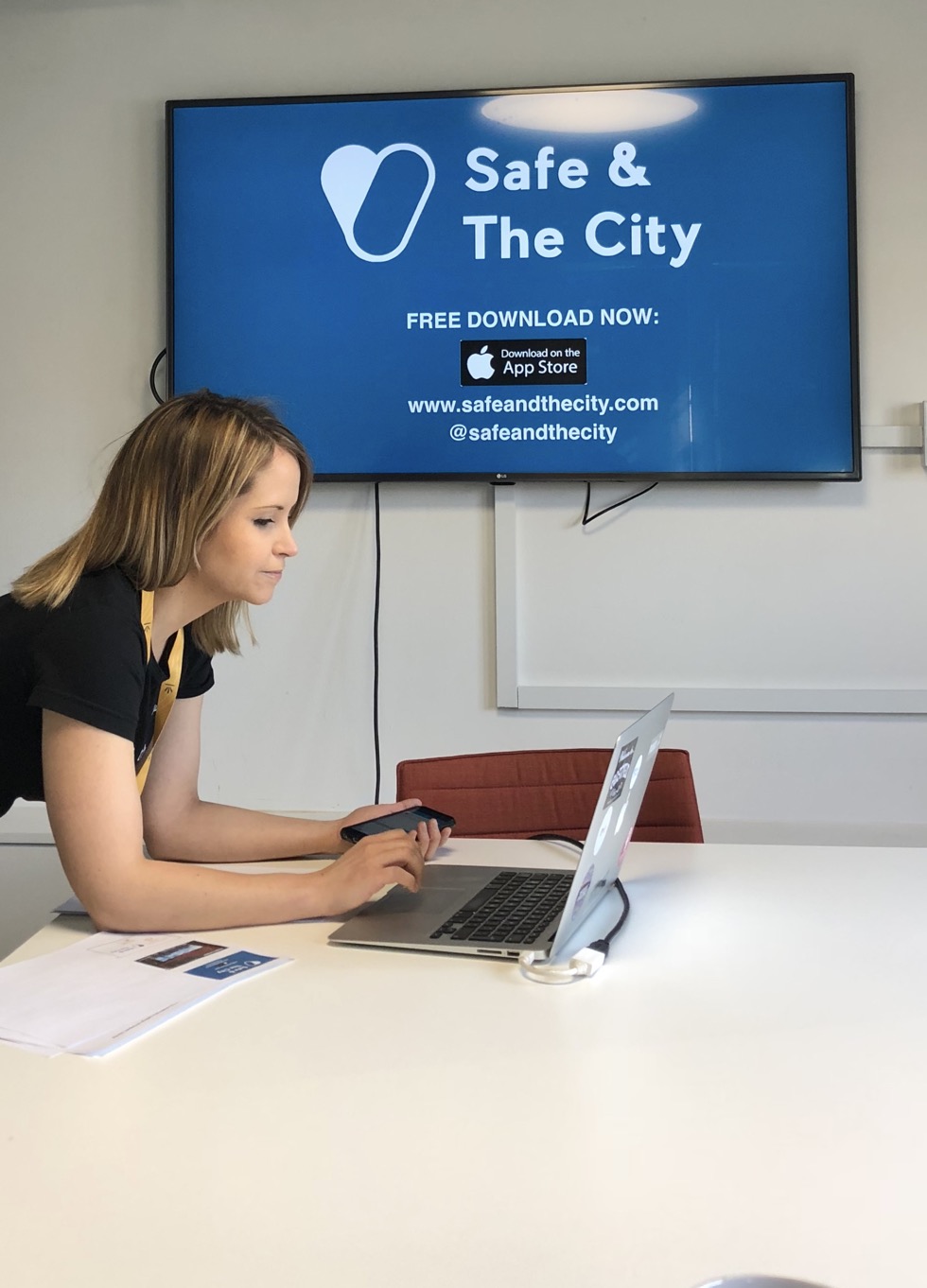 The interview with Jillian Kowalchuk - Founder & CEO of Safe & The City

Irene: „As I met you nine years ago in Australia, I wouldn’t have imagined, that I would be here in London right now and being part of the launch of your safety and navigation app called Safe & The City. Can you please explain to my readers what Safe & The City exactly is?“

Jillian: „Safe & The City is a navigation app, that is not only looking at the quickest routes but safer ones. It uses official crime statistics, so you have an advanced notice, where you should be more aware and prepared petty crimes. This is only one part of the story, as a lot of things don’t go reported such as sexual harassment and other behaviours, that can make you feel unsafe. We also use crowdsourced information from users to understand, what they experienced and felt to have a data-driven approach to make walks safer. Safe & The City works with this information to train businesses to become Safe Sites and to improve the streets and address the epidemic of sexual harassment and violence against women.“ 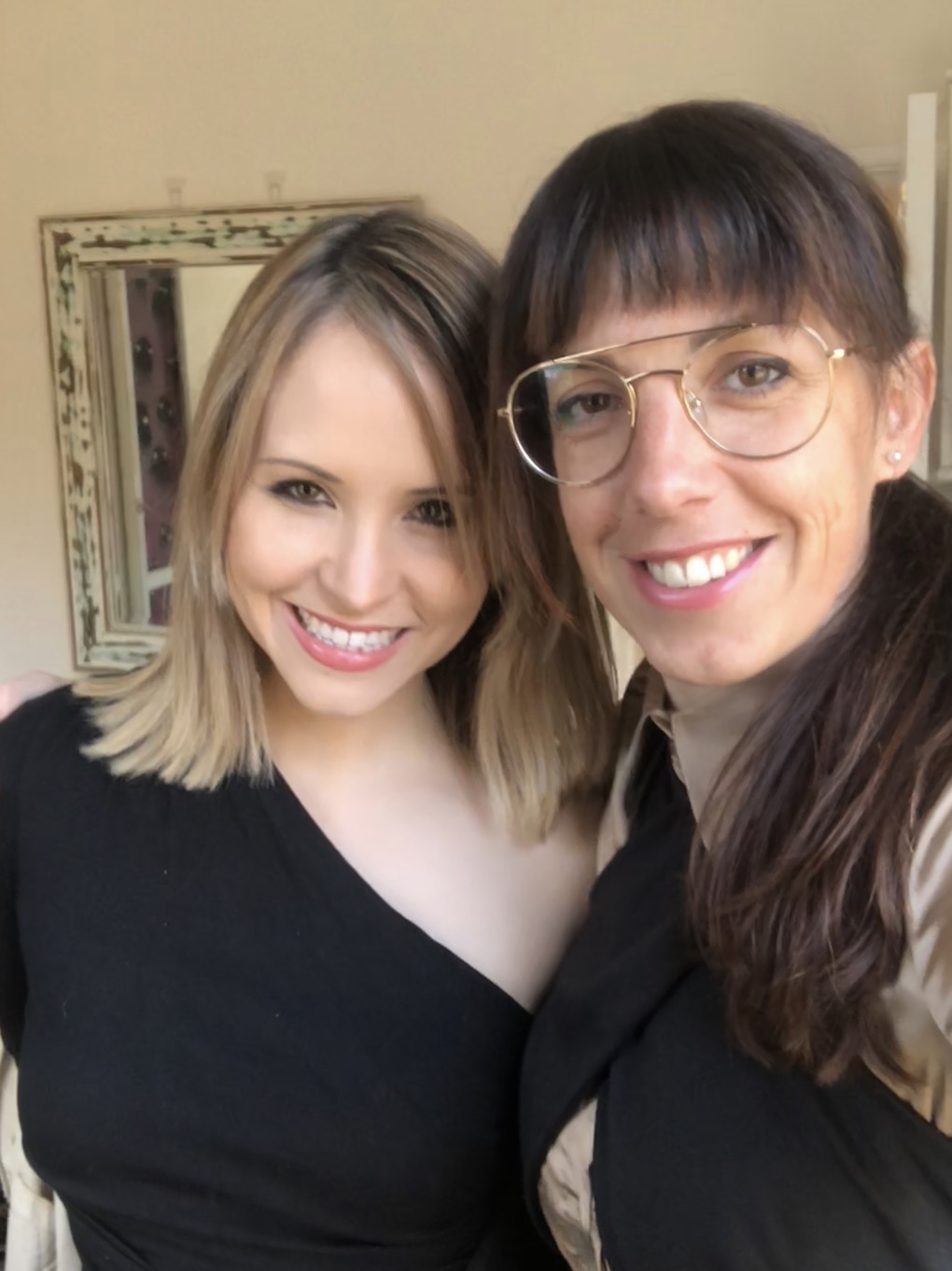 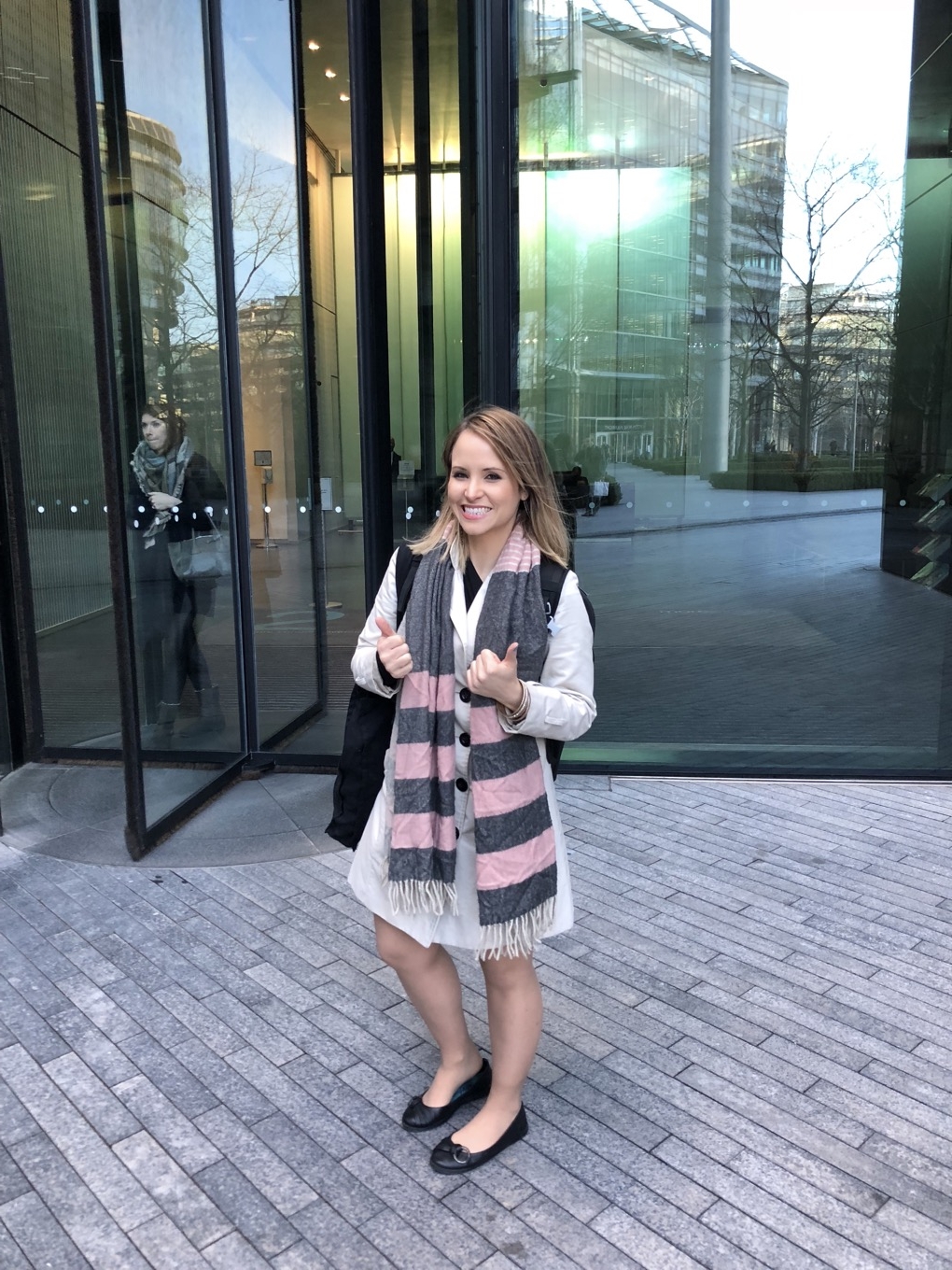 Irene: „How came you up originally with the idea about Safe & The City? How did you previous travel influence it?“

Jillian: „When I first moved from Vancouver to London, I put a lot of trust into navigation apps like Google Maps or City Mapper, but then I was often guided down dark places late at night, like parks and alley ways. One particular night, I was guided down a narrow dark alley way, where some kitchen stuff started catcalling and getting aggressive. I started to feel scared and if they wanted to escalate the situation, I was in the worst place. When I escaped, the idea came to me so other women would not have to go through that, but also we could understand environments that also make people feel unsafe.

I think my previous years of travel and living abroad help me identify patterns and see universal behaviours in people. For example, even if you can’t speak the language, often you can understand body language and emotions. I would look for those clues and trends and be more cautious and aware of peoples behaviours maybe the first day or two. Often, after I got my barrings, I would find out my fears were more than the actual threat. There were always much more good people, who were there to help, especially in poorer places, then bad people.“ 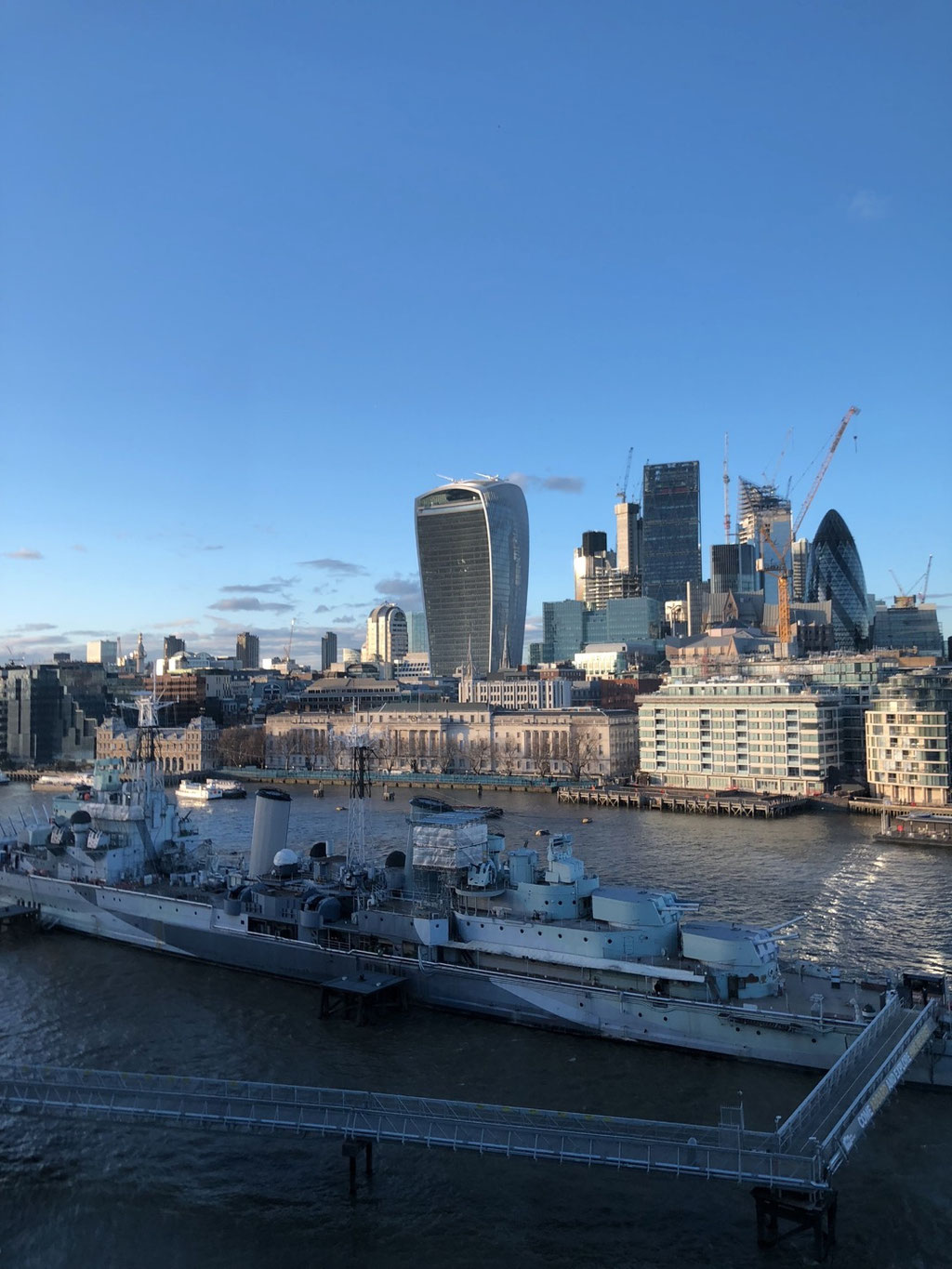 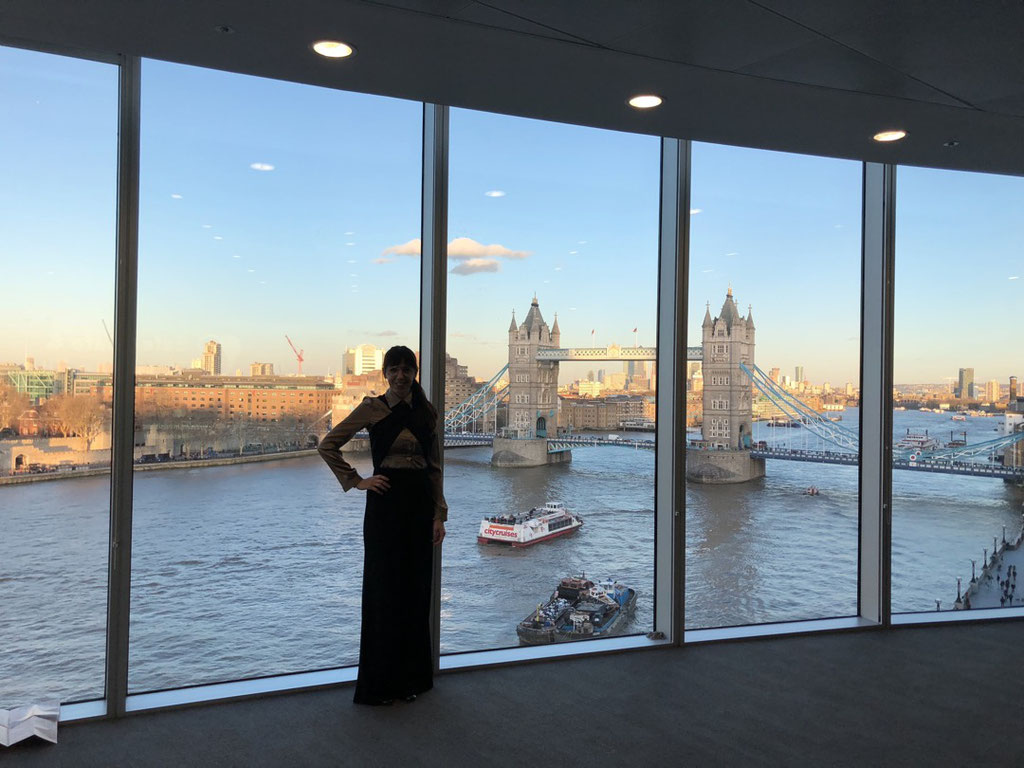 Irene: „What has brought you where you are today? And what made you decide to take massive action on your idea about Safe & The City?“

Jillian: „It’s been quite a journey. A big part of it was growing up abroad and traveling a lot as a child in less common countries. I was born in Canada but grew up in Yemen as a child. People thought, we were in a very scary place with a lot of risk and danger. But again, when you live there, you get acclimatised to those places. I didn’t feel unsafe until we fled due to the civil war in 1994. We had to run for our lives and we had to leave everything behind. But from there I conquered my fears as I think there is little more scarier than war.

I started questioning things quite early. When we did move back to Canada, after I lost my parents, I set off again to travel and to explore myself, to find the answers to my questions. Because I knew where I was wasn’t enough for my visions to help others.

So what let me take massive action was after I finished my Masters Degree. When I moved to London, I sold everything in Vancouver and I took a big risk again in doing what I wanted to do instead of people were telling me to do.

It really forced me to move quickly if things weren’t working since I didn’t have unlimited time or resources. The jobs I was looking for weren’t quite there and Brexit happened. A lot of the funding were getting cut for international public health and HIV work I had done in the past. So I started to look at starting my own. I immersed myself in a world of technology, that I thought could make the biggest impact and provide this technology that can transform peoples lives for their fundamental safety but also for respect for women and women’s empowerments and travel and live their lives however they want.“ 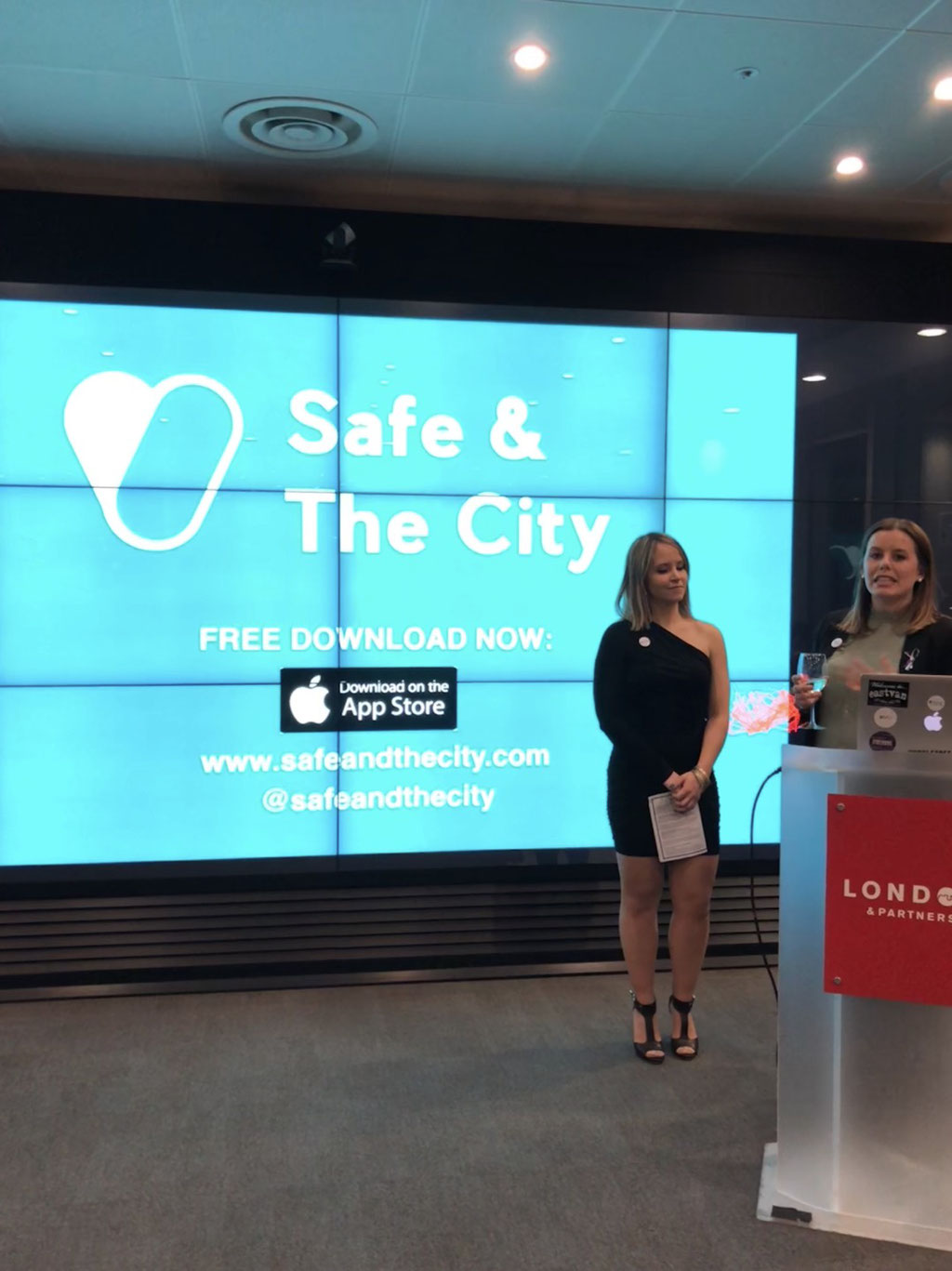 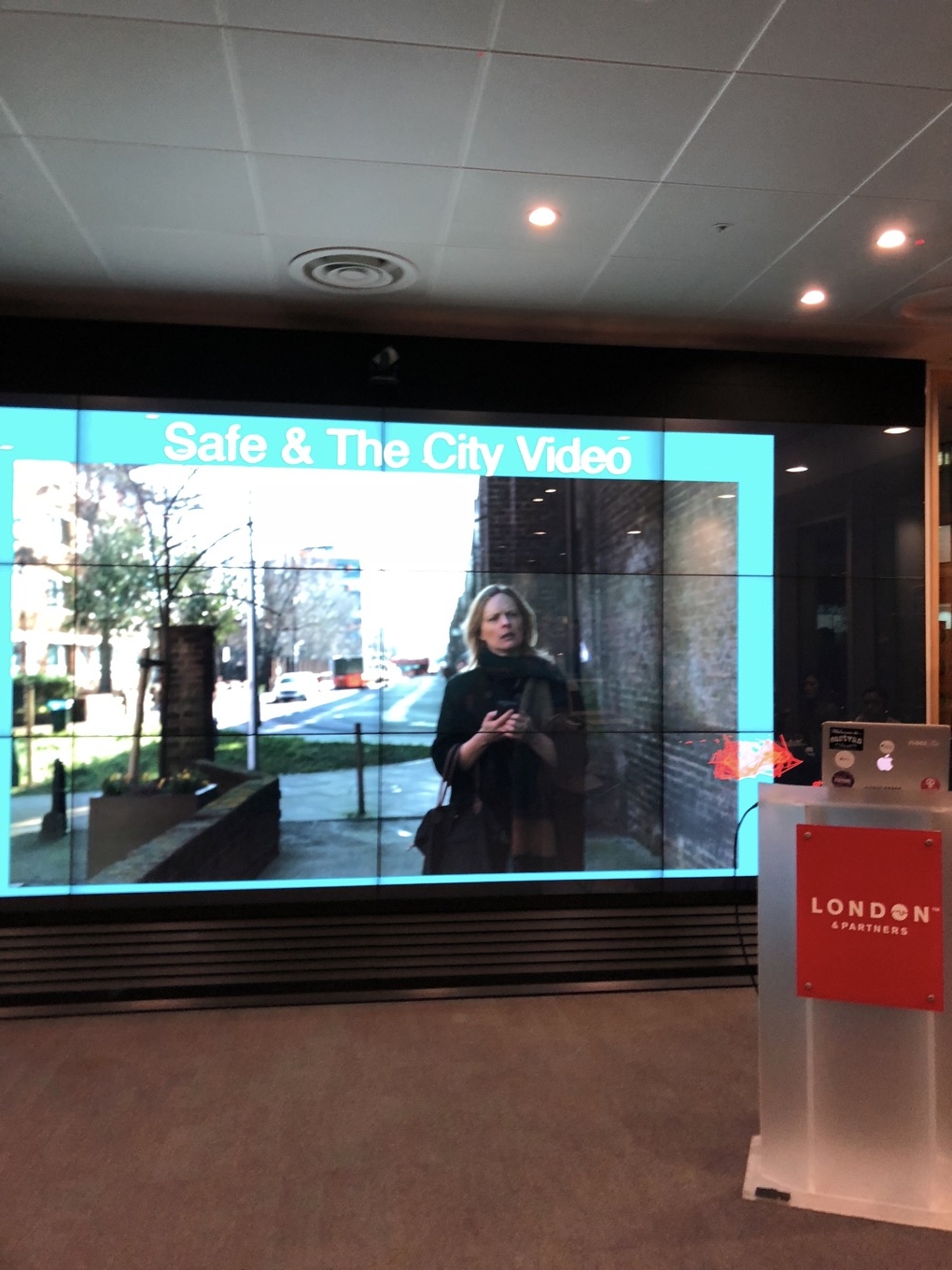 Irene: „What is a typical user's journey for Safe & The City?“

Jillian: „Our primary target are women, so for example, if you were going to meet some friends you’ve never been you could enter your destination, see how long it takes as well as areas along the way you should be more cautious, either about crime or sexual harassment. Simple things like putting your phone away, watching the road and people on it, and turning your music off can substantially reduce your risks of some crimes. Knowing where Safe Site/exit points are, helps you know where you could go if you are in trouble. If there was a full on emergency you call 999, which is in London the emergency contact number. Then when you reach the destination you have an evaluation of your walk. Like rating food but you can rate your walk, if there wasn’t enough lighting and if you felt safe. In future, this helps us to provide those types of walking routes to you.

We are only in the UK right now because we’ve had great support from the police and government. However, we want to move quickly into other countries." 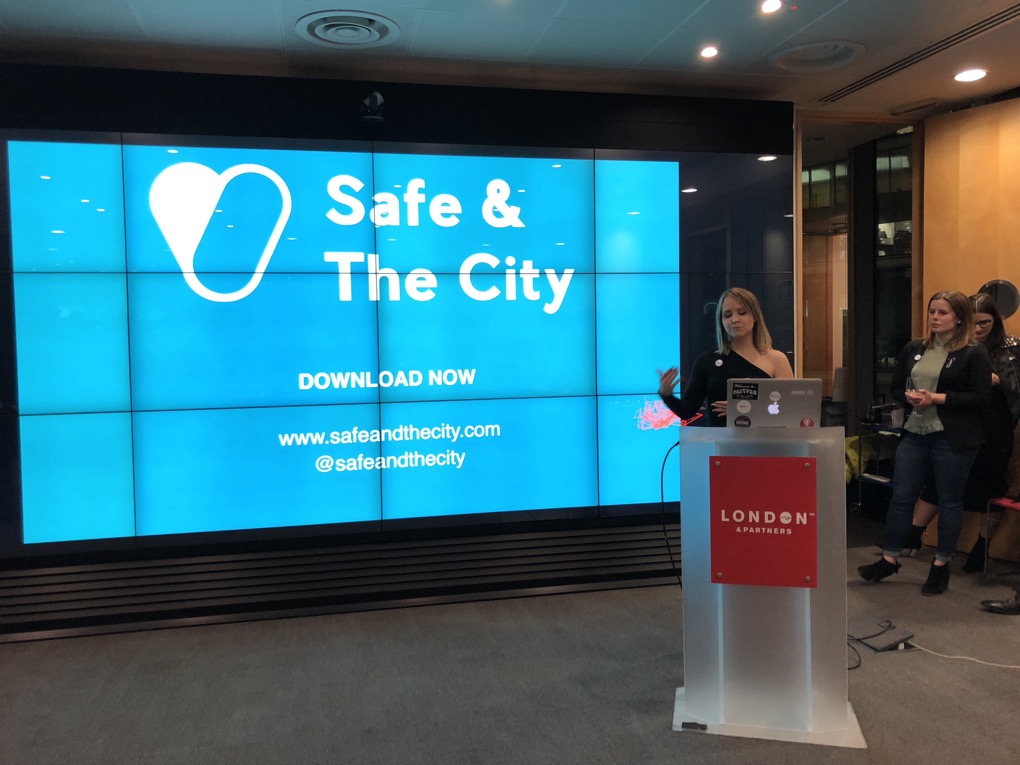 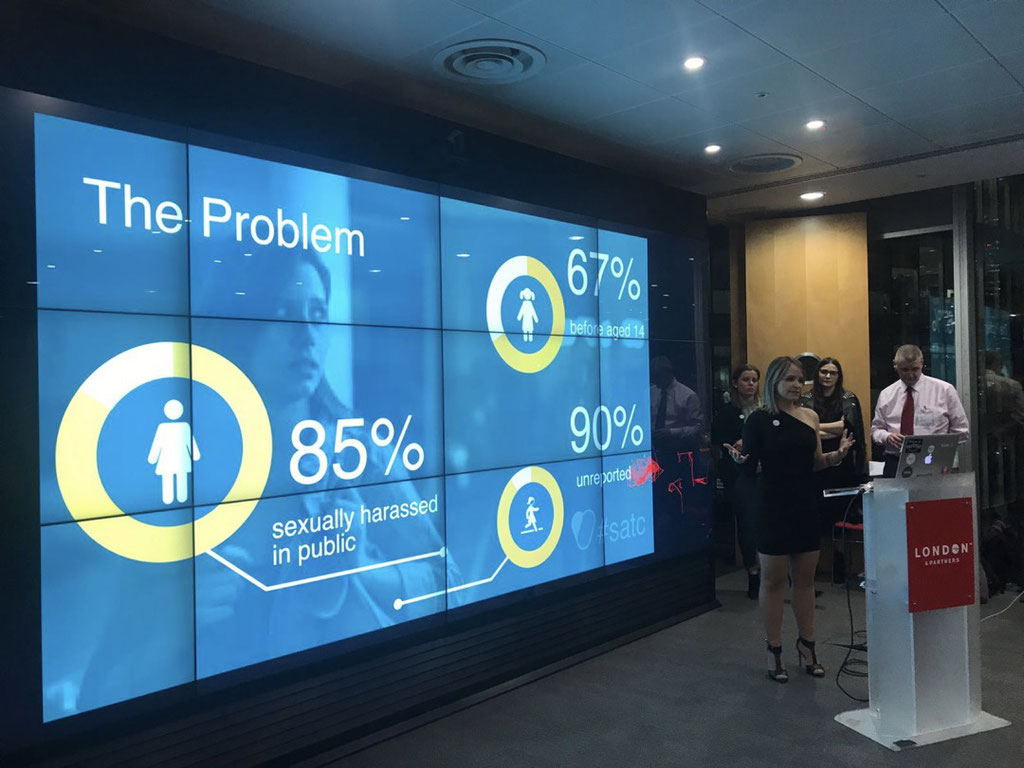 Irene: „What is your big vision for Safe & The City?"

Jillian: „We want Safe & The City to be everywhere and we have the technology to do it. We want to address unreported cases of sexual harassment and violence, mapping that out as well and being able to work with businesses, want to tackle sexual harassment and make streets safer for everyone.

I want us to scale to even poorer countries to show how it isn’t always so dangerous and how you can have this information at your fingertips to keep you safe. These insights can then be used to address many women who have few means to report and support the movement globally to end sexual harassment and violence against women." 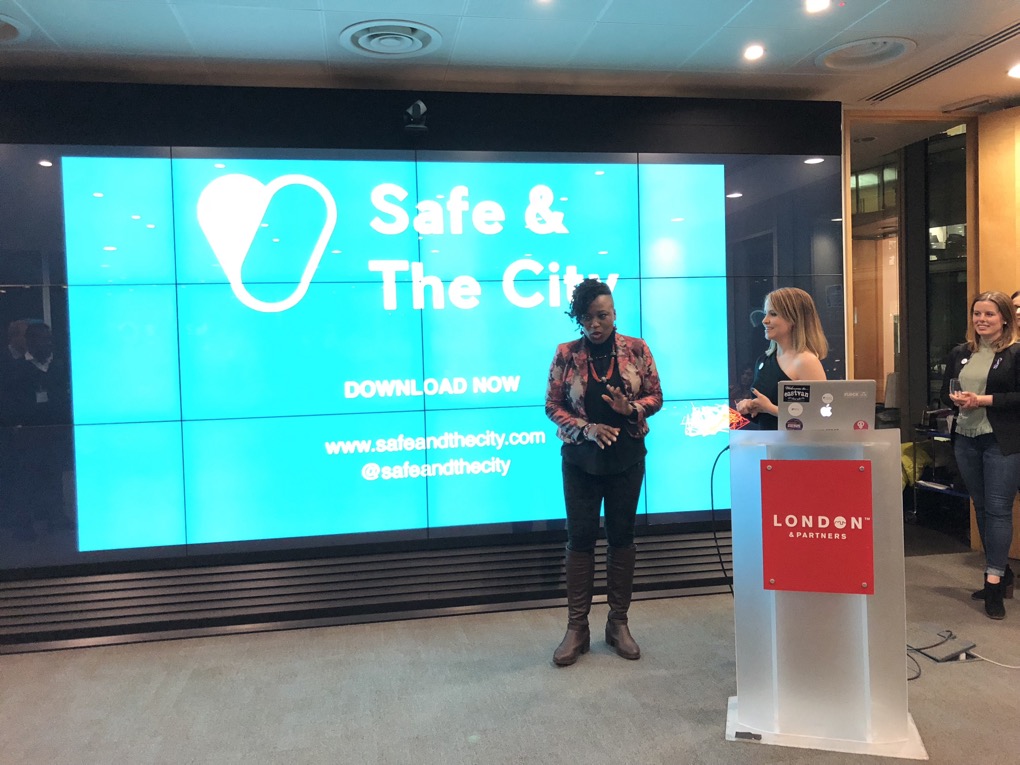 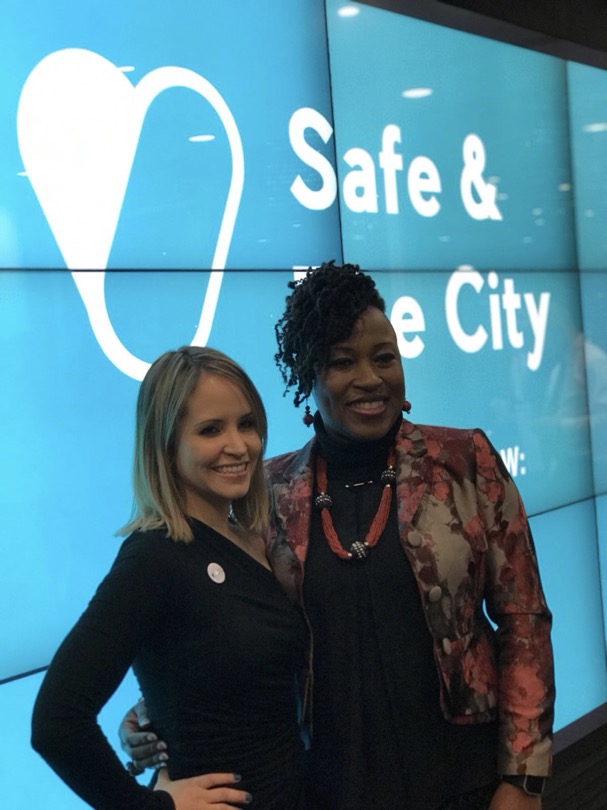 Irene: „What advice would you give a young woman, who wants to travel the world as you did, but is afraid of it or not sure about?“

Jillian: „Travel gives you true confidence that you can handle many situations you could have feared. Young women should have an opportunity to travel and learn from it, because there are so many opportunities to grow. Find other women who have travel a lot and seek their advice. You will have to identify your personal travel style and what you feel comfortable with. Some people like to have an hour by hour itinerary, but I prefer to just show up and see what happens.“ 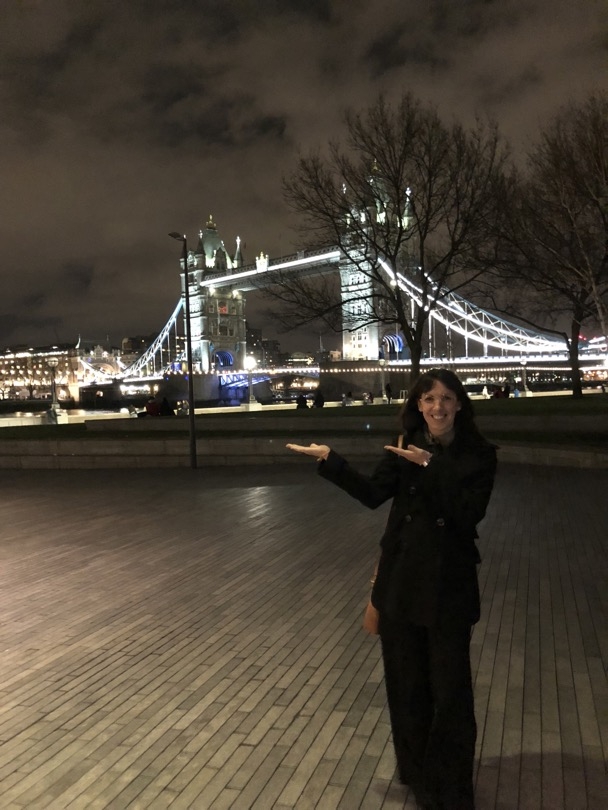 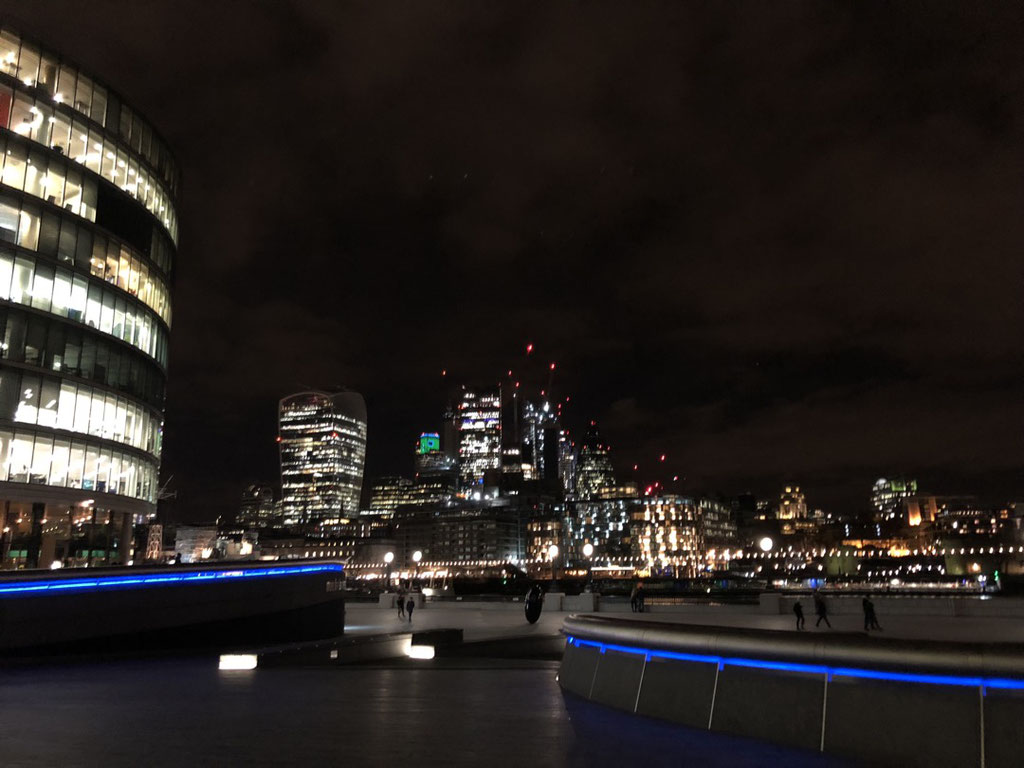 Irene: „I know you as a good friend and I know that you have a crazy working schedule. What keeps you motivated and keep going?“

Jillian: „Entrepreneurship can have a lot of ups and downs. Routine, specially a morning one, is very important, because you are at full capacity and if you fill it with a positive mindset, gratitude, and a healthy body this will help you make the challenges in the day easier.

Surrounding yourself with positive people, who also believe you can realise your dreams. Creating accountably metrics, even if its not perfect is a great way to keep going since it will never be truly complete." 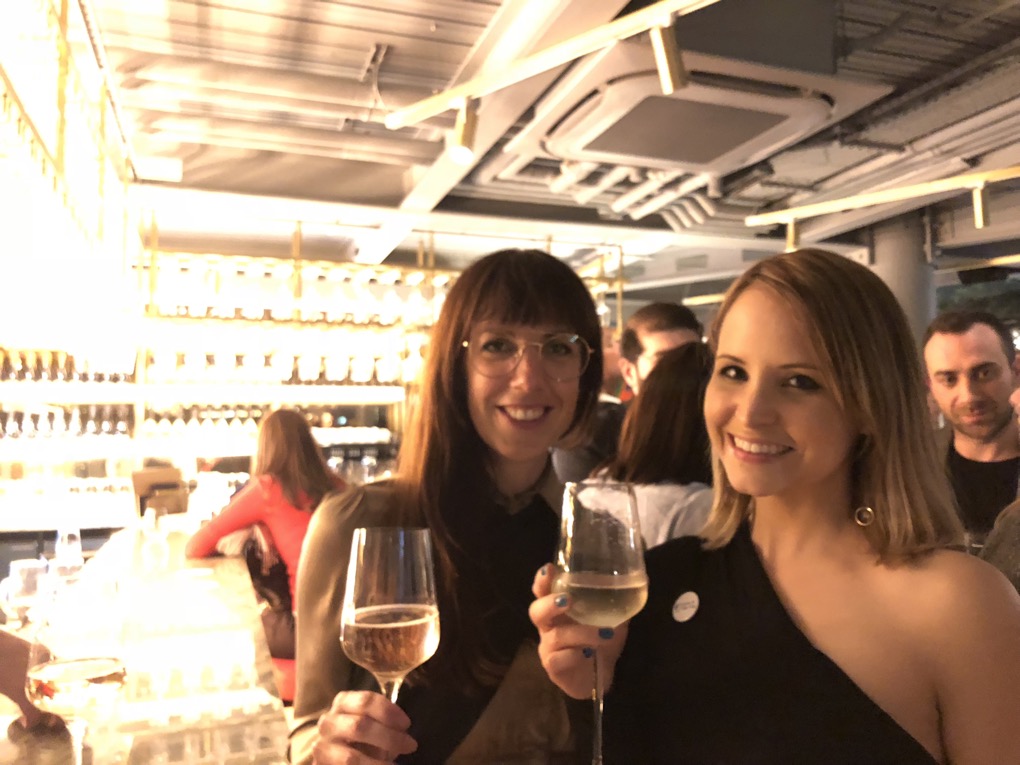 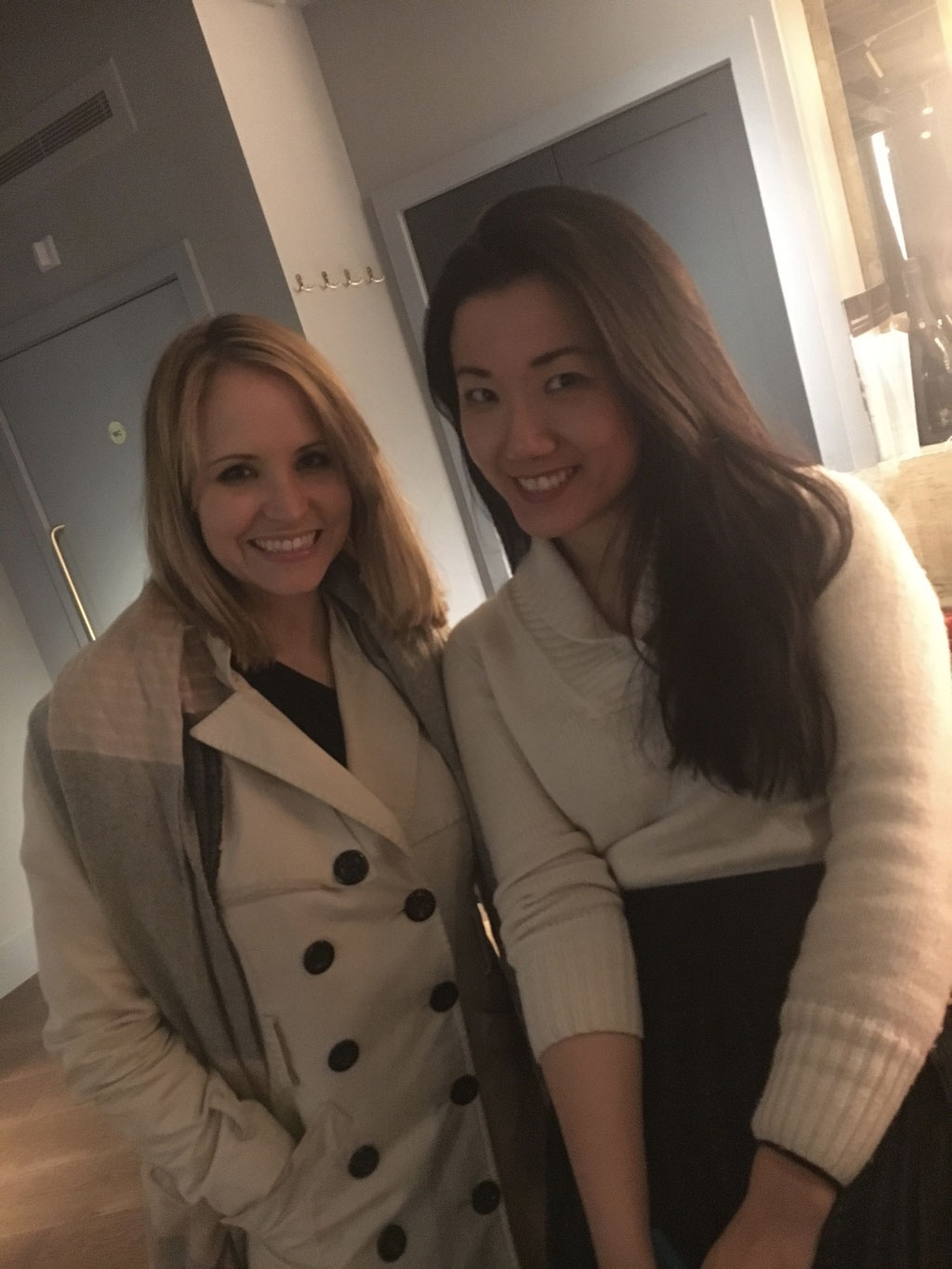 So please feel free to download the app available in the UK store for iOS and soon for Android too.

If you planning on coming to London to visit, download the app for your saftey.